5 Reasons to use the “Feature” pattern in your product 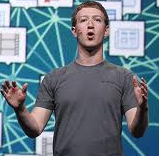 A design pattern is a formal way of documenting a solution to a design problem.

The “Feature” design pattern is a simple yet powerful mechanism that enables you to rollout features based on configuration settings. It provides the ability to turn these high-level features “on” or “off” by changing the configuration parameter values. The basic idea: use a simple mechanism to control the features that are presented to the end user.

5 Reasons to use the “Feature” pattern in your product

1. Reduces the need to branch: The longer your branch remains unmerged, the greater chance that it will never make it. By being able to not turn the feature “on” until ready in production, but continue to work in the main or trunk branch is valuable.

2. Partial rollbacks (isolated): A single new feature will not hold up a production deployment, it can be turned “off” until ready. It keeps progress moving and a feature rollout does not have to necessarily coincide with a code rollout.

3. Different features for different folks: Will make it easier to turn a feature “on” for testing in a particular environment, but “off” for your production environment. It can also help with partial user and A/B testing.

4. Helps reduce risk: With the ability to turn features “off” until ready, it can allow you to increase development velocity without necessarily increasing risk.

My hope: the “Feature” pattern will help you for the same reasons.

For more details about the Feature pattern, see the somewhat terse pattern description below along with the source code. There is not much to this simple yet powerful pattern.

Intent
Provide a simple yet powerful way to turn features “on” and “off” via configuration. This enables certain environments to have certain features turned “on.”

Motivation (Forces)
Demand for high development velocity and the need to mitigate risk.

Structure
The pattern structure is simple and consists of the Feature class. 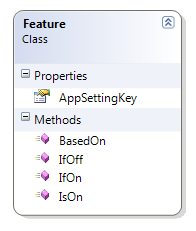 Participants
Feature: Represents a Feature that can be turned on or off based on an app setting. You can take an action if it is on, off, or both.

Collaboration
Here is an example code fragment that interacts with Feature:

Consequences
Be sure to get granularity right.  Be wary of adding features at too fine of detail. Complex feature interaction can also complicate testing. Although a more general discussion, make sure that each feature is justified. However, even in a design world driven by YAGNI and KISS principles, you still need some flexibility—just make sure that it is justified.

Sample Code
As sample code, here are some unit tests that interact with the Feature class:

Enjoy the pursuit of great design.